Taxus baccata is native to the British Isles and considered by many to be the most elegant and stylish evergreen specie available. The small tightly knit needle like leaves and compact habit create a very tidy formal appearance. Tolerant of all soil types as long as it is free draining. Yew really doesn’t like wet ground – at all!

Here are some examples of trees currently available. Click any image to enlarge or to send an enquiry about that specific plant.

Or see our range of available pleached Yew Hicksii.

Taxus baccata is considered by many to be the most stylish and elegant small medium sized evergreen conifer in Britain. A native species it can also be found in Western and Southern Europe, Northwest Africa, Northern Iran and Southwest Asia. Widely accepted as the oldest living plants in Europe, a Yew specimen in Scotland still alive today, is estimated to be 2000-3000 years old. Ten yew trees in Britain are believed to predate the 10th century. A wooden spear head, one of the world’s oldest surviving wooden artefacts was discovered at Clacton on sea in Essex in 1911 and it is estimated to be roughly 450000 years old.

With a dense crown, dark green foliage, slow growing habit and ability to heal from even the most severe pruning, it is widely used as formal hedging, topiary and latterly pleached trees. The foliage is made up of needles, dark green in colour, 1.5-3cm in length. In summer and late autumn small bright red fruit develop, attracting birds such as blackbird, thrush, and fieldfare who feed on them into the winter. In a woodland setting Yew provides important sanctuary for some of Britain’s smallest birds. Tolerant of a wide range of soil types provided they are free draining, the plant will flourish once it takes hold. If drainage is an issue, or you have wet ground, or you suspect flooding (even for short periods), don’t be tempted to plant Yew. In all likelihood the plant will fail. The first sign of a problem is the leaves turning yellow, but by the time you notice this happening it is usually too late to save. Our advice, to install land drains to remedy the problem. Be very cautious when planting in clay-based soils as they are notoriously bad at preventing water from draining away and rotting the roots as a consequence. Be careful not to compact the bottom of a planting pit in areas of clay. On the plus side Common Yew can be found all over London which is surprising considering much of the city sits on rich seams of clay. Good landscapers will always broach the subject and provide a solution for drainage and a course of action.

Yew is very easy to train and shape. The wood is hard, springy and extremely strong and these qualities, combined with the ability to regenerate growth from even the most severe wounds, produce a plant perfect for sculpture. It should be noted the plant is toxic and no part should be ingested. For those with Equestrian centres, liveries and stables, Yew should not be planted on or near paddock fencing where horses and ponies can feed on them. The same advice is given to farmers with livestock. Planting away from these immediate areas where grazing animals can’t feed on the plants is common. Yew enjoys being planted in full sun and partial shade but not full shade as it develops a loose habit with reduced foliage cover in these conditions. Yew can be seen growing happily at stately homes, private estates, parkland, large and small gardens, in tree containers, patio gardens, company headquarters, commercial sites and roof top gardens. line is the slope of the ground. Pleached or Espalier trees look their best when they are planted on flat or gently sloping ground. Doing so will line up the frames and stems and creating effect of one continuous line when viewed at all angles. Even on a gradual slope this effect can be achieved. However, with a slope of more than 10-12 degrees, it may be necessary to step the trees/frames when planting (the frames on freshly pleached trees can be manipulated to account for a sharper slope of perhaps 15 degree if necessary).

To create a good visual effect, it is important to line up the stems and frames (unless you are planting them in a circle or semi-circle). To start off the planting holes should measure roughly double the width of the rootball or pot….

How are Pleached Trees made? Pleached trees or screen trees start life as a seedling or cutting, much like any other tree, being repotted or replanted a number of times in their formative years. They grow happily on the nursery with hundreds or even thousands of other trees. When the time is right, highly skilled nurserymen and woman go out into the field amongst the trees with tags in hand and pick the very best trees for pleaching. The criteria for choosing the best trees for training includes, selecting those with the straightest stems, healthy root stock and appropriately spreading and uninform crowns. Once tagged and lifted the trees are loaded onto trailers and sent to potting sheds for training. Read our full guide to pleaching trees here

Delivery varies depending on: 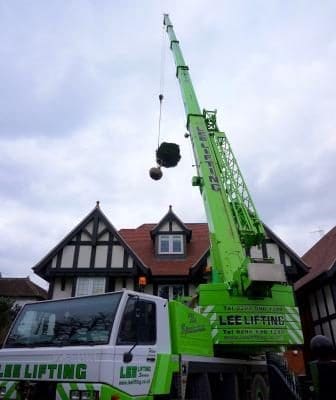 We Have Many More Pleached Species Available

Read more about pleached trees or click on a particular species below.